They are topiray effect figures designed in response to the theme of Neighbourhood, which is the title of the Southbank's summer festival of 2013.

Two sit atop the Queen Elizabeth Hall, next to Waterloo bridge and are inspired by the Blitz-Spritz which occurred after the London riots where local communities joined forces on the streets to clean-up the mess.

The old woman is the familiar figure of the neighbour keeping her doorstep clean and tidy, accompanied by a younger figure mimicking her actions.

‘If every man would sweep his own doorstep the city soon be clean’
[1666 G. Torriano Italian Proverbs 41] 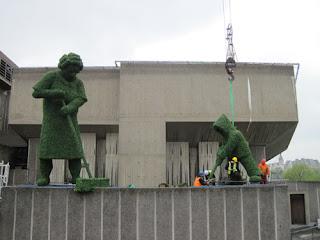 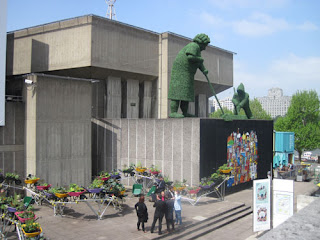 The other two figures are positioned close to Waterloo station, at the rear of the Royal Festival Hall at the foot of Festival Terrace.

Here, neighbours casually chat over a fence. It is a common scene, representing the importance of being familiar with those that live in close proximity. 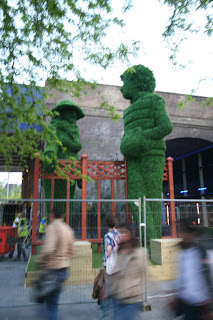 For more information about the Festival of Neighbourhood, visit the Southbank Centre's website.
Posted by Shipshape Arts at 08:49